Professors, scientists and students from Wayne State University School of Medicine were among 14 women who traveled to Washington, DC, this summer to advocate for science-based policies by meeting with US officials.

The women are members of the WSU-based Science Policy Network-Detroit – known as SciPol-Detroit. They traveled to Capitol Hill for meetings June 8 and 9 and championed three issues chosen by the students: federal science funding (America Competes Act), maternal and perinatal health (Momnibus bill), and disparities health (Health Equity and Accountability Act).

The group is an arm of the National Science Policy Network, affiliated with the Union of Concerned Scientists and a registered student organization at Wayne State University.

“I found the trip to DC amazing,” said Clare Zundel, Ph.D., fellow and postdoctoral fellow in the School of Medicine. “I learned so much about how to effectively communicate my science to lawmakers, and the importance of letting them know the implications their votes on bills and packages might have, not just on my scientific research and studies , but also on all citizens who suffer environmental injustices. 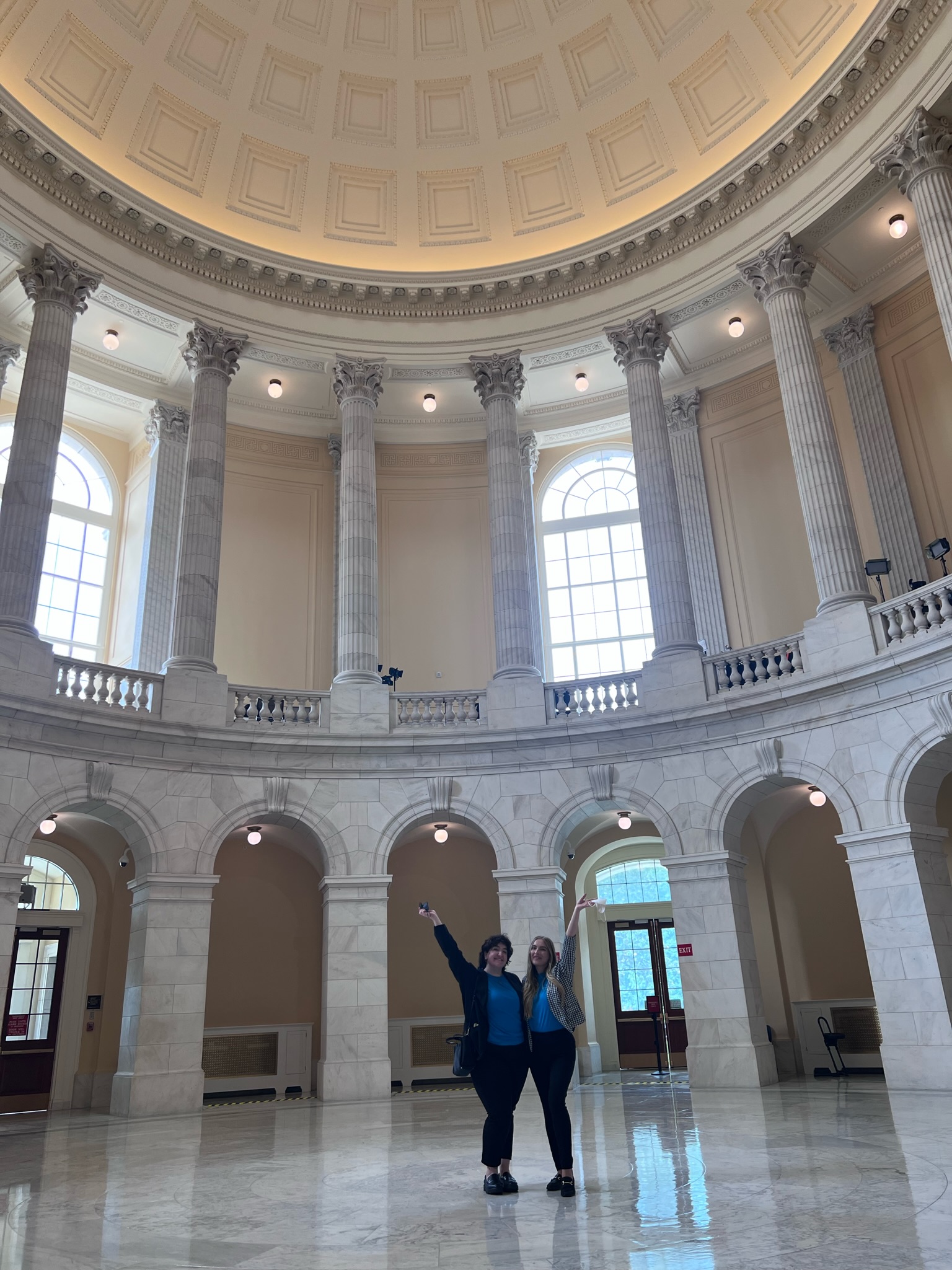 Zundel has been involved with SciPol Detroit for over 18 months, joining shortly after beginning work in the lab of assistant professor of psychiatry and behavioral neurosciences Hilary Marusak, Ph.D.

The organization started in the School of Medicine in July 2020 with three students in Dr. Marusak’s lab, then made a lateral move to register as the primary student organization on campus to become inclusive. She is now a co-counsellor, along with faculty and staff from other WSU colleges and units. Members include people from Oakland University, Michigan State University, and “anybody who’s really focused on what’s happening in Detroit,” she said. “Scientists are trained to talk to other scientists in our specific discipline. It creates a gap. We really want to learn, as scientists, how we can better communicate what we do in the lab.

Zundel’s fellowship focuses on the impact of air pollution exposure on brain development and mental health among adolescents in metropolitan Detroit. “Through my research, I saw the environmental injustices that many Detroit residents experience. Although my research helps identify the effects of environmental exposures, I wanted to do more on the prevention side and thought I would get started in science policy would be a great way to start,” she said.

She plans to stay active in the group. “My goals moving forward with the organization are to continue to create important policy briefs on environmental health issues in the city of Detroit, such as air pollution, exposure to lead, increased heat exposure and more,” she added.

The trip was supported by donations from the WSU Division of Government and Community Affairs, the WSU College of Liberal Arts and Sciences, the WSU Department of Psychiatry and Behavioral Neurosciences, and a micro-grant Research!America.

SciPol-Detroit worked closely with the Government and Community Affairs Division to prepare for the trip. The group spent months practicing speaking with lawmakers to deliver their message in a concise and meaningful way, emphasizing relevant policies. They have learned to translate their work as scientists into concrete recommendations and direct “requests” to legislators.

Lana Grasser, Ph.D., has been visiting DC for advocacy work since 2015. During this last visit, Grasser’s friend and SciPol Detroit colleague Ayia Almufti shared her personal story and interests from research when advocating for black maternal health. Law.

“Her message was so powerful and her story really moved me. We actually discovered that we had common research interests and we were able to work together to find her a position in a lab doing the work she is passionate about,” Grasser said “Her portrayal at that time as a voter was so critical, and I truly believe she is a role model and a witness to how we can all use our stories and experiences to shape our communities for the better.”

Grasser has been a member of SciPol Detroit since its founding in 2020 and has served as a liaison with the National Science Policy Network. She graduated from WSU Graduate School’s Translational Neuroscience program in 2022.

“I think it’s absolutely essential that scientists share their work with the public and policy makers, keeping the public as active stakeholders in research,” Grasser said. “The need for this has become particularly prevalent in the context of the pandemic – it has become clear the huge gaps we have between what we are learning in the lab and what the general public is aware of. For example, there was a lot of fear surrounding the rapid development of vaccines, and I think that was deeply rooted in the lack of knowledge that mRNA vaccines had actually been in development and testing for over 20 years. . The difference was that nobody talked about it to the public. We must keep the public and decision-makers involved in our research at every stage of the process.

She leaves Wayne State in the fall for a postdoctoral fellowship at the National Institute of Mental Health. “However, I will bring with me the tools and skills I learned at SciPol Detroit,” she said.

Victoria Kelley is a second-year medical student who joined the group a month before the trip after hearing about it from Marc Corriveau, who teaches the medical policy action option at the School of Medicine.

“Sci Pol allows me to translate my passion for politics into direct advocacy for specific health policies at the local, state and national level,” Kelley said. “I spoke to Congressman John Moolenaar to ask for his support on the Health Equity and Accountability Act, using my experience as a medical student on the clinic’s board of directors. free Robert R. Frank Student Run in Detroit to highlight how this bill could improve obvious health inequalities. Although we knew at the start of this meeting that Rep. Moolenaar was unlikely to support this bill, the experience for me underscored the importance of connecting with your representatives in Congress in hopes of creating a change in you.

SciPol Detroit is open to anyone interested in science communication or science policy. The group is planning several events and opportunities this summer and next year, including workshops, roundtables, community engagement internships, and trips to Lansing and Washington, D.C. For more information, visit www.scipoldetroit .org.