The remarks were delivered by CPUSA Co-Chair Rossana Cambron at the opening of the CPUSA International Conference 2022: Dismantling Imperialism in the 21st Century, September 11-12.

Our ideology represents the concept that none of us, no section of the international labor and popular movement is alone in the struggle against the forces of international capital, repression and reaction.

We have witnessed the expression of this concept in the selfless global support for the Vietnamese people’s struggle for independence against imperialist aggression, Cuba’s heroic material support for the beleaguered people of Angola, and the recent from Cuba to Venezuela, training doctors and providing eye care for its citizens. Moreover, the support given by the former Soviet Union to Cuba when they faced US imperialist aggression.

The massive global campaign that helped free Comrade Angela Davis from racist imprisonment here also defines this important principle. There are many more examples of our comrades and friends crossing borders to stand with our comrades against imperialist aggression.

We have more than enough food to feed the world, but for the sake of profit, millions of people are starving. In the capitalist world, wages for the working class have stagnated, but the costs of basic necessities of daily life, such as food and fuel, continue to rise. Scientists are warning us that we are rapidly killing our environment, but no significant progress is being made as environmental regulations mean lost profits.

Billions of people are depriving themselves and living in danger so that the few at the top can continue to make record profits year after year.

The United States uses its economic and military power to increase the profits of international capital. The American empire, with its nearly 1,000 military bases around the world, is on the march on all fronts. 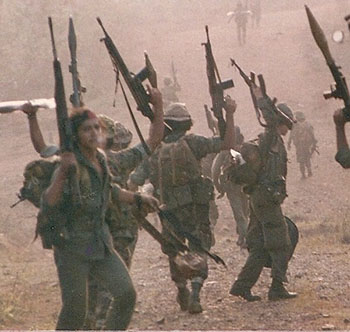 In Europe, the continued expansion of NATO continues to threaten world peace. In Africa, the US Africa Command (AFRICOM) kills countless civilians every year. In the Americas, the United States continues to invoke the 19th century Monroe Doctrine, treating all countries as if they were American colonies, not to mention the nearly 60-year-old criminal blockade of Cuba. Economic war has been declared on Venezuela, Nicaragua and other countries. In the Middle East, the United States continues its destabilizing intervention in Syria, continues to fuel and support the oppression of the Palestinian and Yemeni peoples, and continues to apply illegal sanctions against the Iranian people. In Asia-Pacific, the United States is pushing for conflict with China, risking a disastrous world war.

The Communist Party of the United States recognizes that our struggles at home are intertwined with the struggle abroad. By working to defeat capitalism here in the United States, we can help end the horror of American imperialism abroad.

To that end, our Party recognizes the importance of building a strong, broad, working class-led peace movement here in the United States – a peace movement that, at its core, is driven by anti-imperialist principles. But to be truly successful, this peace movement must be part of a larger international peace front.

The peace front consists of overwhelming global public opinion in all countries against war and in favor of peaceful solutions, as well as organized peace and social movements working directly to achieve these goals. It also includes existing socialist countries and developing countries that maintain some degree of independent policies.

The Communist Party has a special responsibility here at the heart of world capital, imperialism and reaction.

We hope that this conference will help to be a catalyst for a strengthening of our Party’s peace and solidarity work, not only for our Party members, but for all peace-loving people at home and abroad.

One question we should ask ourselves as we listen to the greetings and remarks and participate in the discussions at this conference is: what can my club do, in our community, to help grow the peace movement and gain the support of the international community ? The most immediate thing before us is to do everything we can to ensure that no more pro-fascists are elected to public office.

The forces of imperialism and capitalism are strong. But, when the international working class pulls together, we are stronger and we will win!